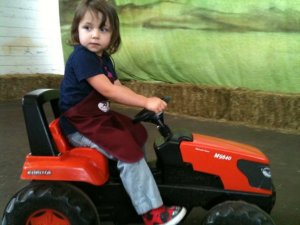 Maybe Shorty #1 will have a green thumb?

I think I may have a black thumb.  I can’t seem to grow anything… except weeds and zucchini.

When we moved into our house 5 summers ago we inherited a backyard full of beautiful things.  The previous owner was definitely a green thumb and she knew her shit.  Me, on the other hand – 5 years later -and I’m staring down the barrel of Alice in Freaking Wonderland.  Its overgrown and full yet patchy and prickly at the same time.  I realize I need to do some thinning but much like my eyebrows I have a tendency to overdo it.  Good news is that the eyebrows grow back quicker than the laurel hedge (oops).

I thought it would be great to grow things we could eat.  So I spent a Saturday ripping out an entire section of the garden that was currently occupied by a nest of tiger lilies and irises.  I didn’t realize that these were years of intertwined bulbs I was messing with so it took a loooooong time.  I brought in some fresh top soil and set out to plant the garden… from seed.

Yeah.  Those suckers are SMALL.  Really small and you’re supposed to space them apart – far apart.  Well, it didn’t work out as planned I may have overseeded (yes, this led to clusters of mutant mini carrots all growing into one another – lovely).  I lovingly tended the little veggie patch – but as is wont to happen here in the Pacific Northwest we experienced a very extended Spring followed by June gloom and the seeds took ages to sprout.  Finally, July came around and brought some sunshine and warm temperatures to our little yard and the veggie patch jumped to life.

I was buoyed!  Excited about the prospect of cooking up our carrots and green beans, roasting the zucchini and building a cucumber salad.  July marched on and the garden slowly followed behind.

In August the only crop we could actually make into a meal were the zucchinis.  By now I had abandoned the shriveled cucumber plants, bid farewell to the scrawny green beans and well ran like hell from the creepy mutant carrots.  But the zucchinis were there and they were flourishing – yay!  Until…

…the aphids arrived.  I was trying to keep our little backyard oasis organic, so I asked Google what to do.  Ladybugs!  Of course, the ladybugs will eat the aphids.  Off to the organic garden shop to pick up ladybugs.  250 of the little dolls.  I brought them home for what I like to call The Great Ladybug Emancipation.

The next morning I went to check the garden – the aphids were gone… and so were the ladybugs.  Every last one.

That’s when the zucchini developed mold and I hung up my garden gloves for the season.  This year I really gave up.  I’ve just planted a patch of impatiens.  Word has it that they could careless about the sun, so lets see what happens.  I did add a small zucchini patch only because I’m a glutton for punishment.

I guess I’ll never be an urban farmer…

Follow the rock and roll mom on the move on WordPress.com
Join 822 other subscribers