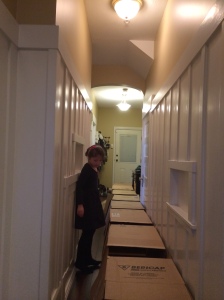 Who needs toys when you have BOXES!

I am sure you have been losing sleep, wondering what happened with our house.  You can tell I’ve been kinda busy with this whole moving thing that I haven’t even had a chance to post an update.  Well, the good news is that we sold our house on the first showings.  The fact that we didn’t have to clean the house for multiple showings was a Godsend and I could kiss those buyers for simply saving me from the complete nightmare it would have been to forensically clean the house one more time.  I mean, come on.

So we’re sold, we’re messy and we’re now waiting for the next horror show – the actual move.  Luckily, the purging and storing plan we were on helped a ton so we only have to pack up the remaining half of our belongings.  J has quite aptly pointed out that the Storage Pod we used could now effectively be tossed into the ocean as we have clearly not missed one thing in there.  (Well, I have missed my red jeans.  Those are in there and I wanted to wear them the other day.)  Don’t worry, we won’t actually throw it in the ocean, we’ll just pile it all into the new basement and look at it the next time we move.

All this aside, the nightmare of packing is still upon us.  It absolutely amazes me how many boxes it takes to pack it all up.  Linens and pantry items, clothing and dishes.  Its a lot of stuff that we need to live everyday (ok almost everyday) and when you start pulling it out of the closets and cupboards and putting into boxes its a crap-load.

The actual move begins a week from today.  Will we be ready?  Will everything make it to the new house relatively unscathed?  Will I make it through the process relatively unscathed?  Will our kids make it through the process and not want to kill us at the end?  Ugh.  What were we thinking.  The old house was great, wasn’t it?  Damn you society for making us want to go bigger and better! 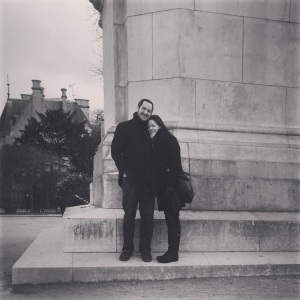 Me and J beneath Charlamagne by Shorty #1

We went to Paris last week.  Me, J and the Shorties.  I was excited by the prospect of showing them the City of Light and for a chance to be in Paris with plenty of free time to explore. It was an adventure.

We had been warned that perhaps a European sojourn was not exactly THE holiday for a young family, but an opportunity arose and the airmiles were cashed in and we decided to take a chance, win a prize (in the words of my poetic husband).   You know what, we totally won.  It wasn’t awful, it wasn’t boring and we were not in the least bit disappointed.  But we did learn a few things along the way…

1. International Air Travel in the days of personal screens, iPads etc can actually be pretty manageable.  Just don’t expect Les Petites to like the airplane food, even if it is the children’s meal.

2. Jetlag is a nightmare.  No way around that.  So just accept that for the first few days you may be sleeping the day away, so embrace the night.

3. Sort out your local transportation.  Paris is best explored on foot, except when you’re rolling with a 2 and 7 year old.  Various transport devices for the Shorties was the only way to go.  Stroller, carrier and scooter gave us options for them to move around and still be able to walk for miles.

4. Bribery is awesome.  Nothing like a macaron at the end of a long trip to convince La Petite to carry on. 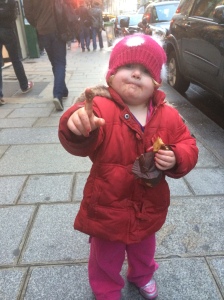 5. Don’t expect them to be fascinated by all the incredible art and history around you.  Rather let them be fascinated by the things that they find amazing.  Case in point, we took a trip to Versailles.  Shorty #2 was fast asleep on my back (NOTE: they do NOT allow strollers in the Palace – that was an AWESOME discovery as we reached the front of the line) and #1 was walking along the tour with us.  I gave her the task of counting all the suns she could see (good on Louis XIV for picking an emblem that’s easy to spot and placing it everywhere in the palace, thanks for that dude) but by the time we reached the Hall of Mirrors she was done.  “I’m bored” followed quickly by “I’m tired”  and then followed by “Can we GOOOOOO”.  It was the moment we had been waiting for on the tour and she decided now was the time to fall to pieces.  Luckily the Hall is filled with statues in various states of undress.  The Sun count very quickly became the Weiner count.  She laughed through the whole thing counting penises on the statues and every little naked cherub in the room.  I was pretty grateful for that revelation!

So the moral of this story – be brave, go with the flow and enjoy the moment.  By embracing the simple things on our trip we were able to experience Paris and actually have a great time as a family. 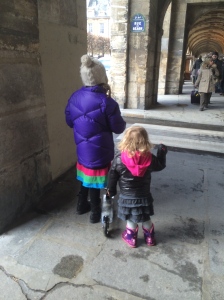 The Shorties at Place des Voges

Follow the rock and roll mom on the move on WordPress.com